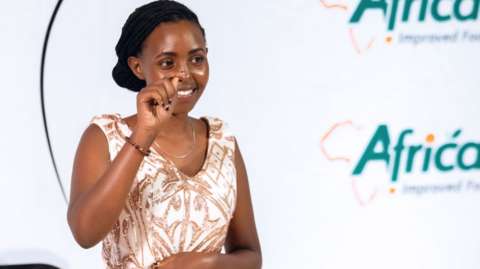 Throughout its 12 editions, the Miss Rwanda Pageantry has seen many ladies from different backgrounds and with unique characters but nothing like what Uwimana brings to the table.

26-year-old Jeannette Uwimana has become the first deaf contestant to take part in Rwanda’s national beauty pageant. She is the first young woman with a disability to participate in Miss Rwanda throughout its over 12 years of existence.

On Saturday, February 5, Jeannette took a bold step to try out at the pageant’s auditions held in Huye District. The high school graduate who was born in Busasamana in Nyanza District in Rwanda says it has always been her dream to participate in the Miss Rwanda pageant one day.

Uwimana is now in boot camp with 20 others ladies of the Miss Rwanda finale in mid-March.

Jeannette Uwimana first attempted to join the beauty contest in 2021 but was discouraged by some of her friends who told her her disability would draw her back and make it difficult for her to succeed in the contest. Many of these detractors questioned if a deaf person was eligible for the competition.

“When I finished my secondary school studies I thought ‘why should I not participate and see how it goes? My family supported the idea and here I am. My family was ready to support me but some of my friends said it was not possible because they thought I would not communicate with the judges. For them, it was impossible because the judges couldn’t understand me,” she said in an interview.

It is in this regard that she called for more training on the use of sign language in different sectors to ensure effective communication with deaf people.

“Communication is always a challenge when people do not know sign language,” Jeanette stated.

Her mother on the other hand was not surprised by her daughter’s feat.  According to her, Uwimana who is her only daughter out of seven children had always been into fashion.

During the preliminary rounds, Uwimana communicated with the judge using sign language, interpreted by her close friend Faïna Kabayiza.

The two have been good friends since they were classmates in high school at Groupe Scolaire HVP Gatagara Huye in Rwanda, where she completed her secondary studies in Mathematics, Economics and Computer Sciences (MCE).

Their bond grew stronger thanks to Uwimana’s quick thinking to teach Kabayiza the sign language so they could communicate with ease.

Meghan Nimwiza who is a spokesperson for the Miss Rwanda pageant and a previous winner said the organisers were proud that the contest was more inclusive this year.

Rwanda’s deaf community has applauded Uwimana’s tenacity and decision to participate in the contest. The country has recently adopted a new law that seeks to ensure language is included in all public communications with more than 33,000 people registered as being deaf during Rwanda’s last census in 2012.

Ms Uwimana believes she is the best candidate to win the Miss Rwanda crown, telling the BBC: “I can confidently say that I possess all the requirements – beauty, brains and culture.”

Meanwhile, the contestant claims there remains a lot of work to be done to ensure the inclusiveness of persons with disabilities. This includes consciously putting more effort into changing the community’s mindset that disability is not inability.

“Persons with disabilities are able to achieve so much but it is discouraging for them so much when they are excluded. Some people in the community think that they are not capable of acquiring skills at school like others but it’s totally the opposite. That’s why I want to raise awareness among concerned organisations to help me advocate for them so they can get access to education,” Jeanette said.

Preserving Malian music during a war