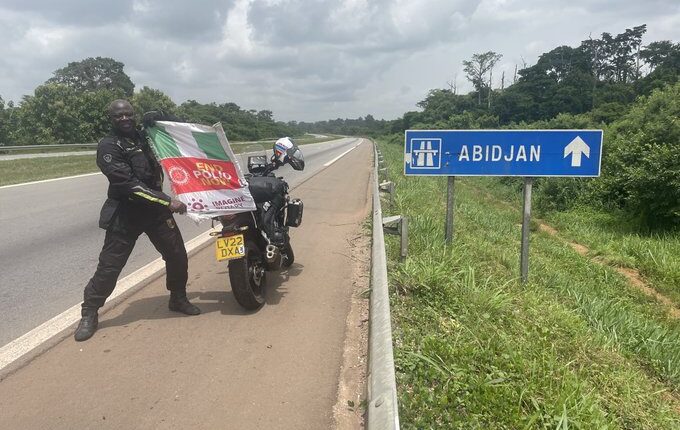 Nigerian Kunle Adeyanju has finished the treacherous journey from London to Lagos on a motorbike in his campaign to raise awareness and raise funds to end polio in Africa.

He told BBC News Pidgin that he was using the journey to give back to society by educating women and children along the route about polio.

Adeyanju said the support he received throughout the journey was beyond his expectation. Many people offered to donate to the cause through the Rotary Club.

He crossed the English channel into France then passed through the Spanish towns of Girona, Valencia and Cartagena before crossing the Mediterranean Sea on a ferry through the Strait of Gibraltar.

He disembarked the ferry in the Moroccan coastal town of Tangier and rode through the capital, Rabat, then to Marrakesh before crossing to Mauritania.

The journey then took him through Senegal, Mali, Burkina Faso, Cote d’Ivoire, Ghana, Togo and Benin before arriving in Lagos.

The 44-year-old said passing through the Sahara desert was the most difficult part of the journey. It took him seven days.

“The Sahara desert is not a place where a human being is supposed to be. That place is unfriendly,” he said.

It took him a year to prepare and develop a plan for the whole journey, a painstaking process which included identifying hospitals and police stations on the route.

He also had to learn mechanic work so as to repair his motorbike in case of malfunctions on the road.

He had previously cycled from Lagos to Ghana and twice climbed Mount Kilimanjaro in Tanzania – Africa’s highest peak.