‘This is my bed’: Unemployed finance expert who sleeps on academic credentials 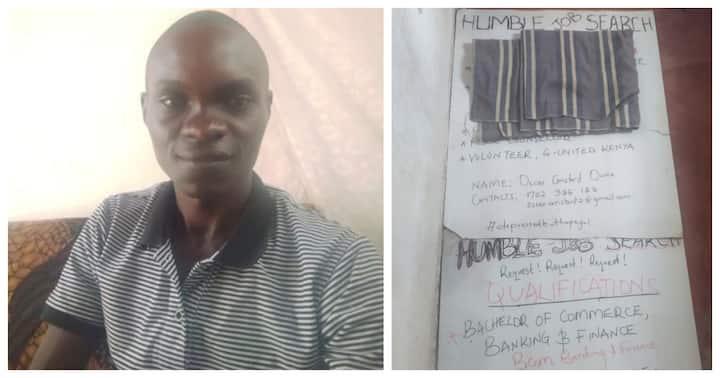 If education was the key to success, Oscar Constant Ouma would be a gatekeeper to many successes in his career. When he was an employed banker, little did he know that a simple misunderstanding would reverse this position.

Oscar was at the peak of his career when a confrontation between his wife and then manager led to the termination of his job.

It was a setback that not only affected him mentally but also flung him into joblessness, something he is yet to recover from. Thirty-one-year-old Oscar Constant Ouma has sent out an appeal to Kenyans to help him get a job, adding that he sleeps on his academic qualifications every night.

After graduating from Egerton University in 2013 with a Bachelor of Commerce in Banking and Finance, he has been jobless thanks to his wife’s insecurities that got him sacked from KCB Bank.

Ouma recalled once his wife heard the voice of his then-manager who was a female, she hurled heaps of insult on her and dipped his phone in water.

“I left my phone on the table and went to the bathroom then the manager sent a message asking if I could work on Saturday. Since I never went to work on weekends, my wife didn’t believe it so she took the number and called.

“I only realised what had transpired when I was handed my termination letter,” he recounted.

Ouma, who was unaware of the dramatic turn of events reported at work only to be met with a letter of termination as he failed to honour the manager’s request over the weekend.

Even with the job loss, the young man forgave his wife and moved to Nakuru with her where he worked at a construction site. Unfortunately, his asthmatic condition from birth made it difficult to lift heavy items or inhale cement for long.

“Even when I am given a job, I am let go because they fear I’ll collapse on them. And when I am paid I spend all the money on medication,” he added.

When he returned from his hustle one fine evening, Ouma discovered his wife had left with everything in the house – not even his savings were spared.

The shock coupled with his stress from unemployment sent him down a rabbit hole of depression.  A situation that saw him confined to a rehabilitation centre for six months over mental instability.

Using academic papers as a mattress

He eventually resorted to sleeping on a board on which he has listed all his academic qualifications every night with the belief that his situation will change someday.

Despite being a qualified Accountant, Tax Advisor, Business Consultant, Banking and Finance expert and a former G-United Volunteer Graduate Assistant, his search for a job has been futile.

“Every day, I literally sleep on my qualification. Connect me to your HR and networks. My strengths are accounting, finance and portfolio management. I hope one day life will take a different twist that will wipe my tears ever,” he appealed.

“Every day, I literally sleep on my qualification. Connect me to your HR and networks. My strengths are accounting, finance and portfolio management. I hope one day life will take a different twist that will wipe my tears ever,” he appealed.

He continues to search for a job on every avenue including social media platforms.

Diana Chepkemoi: I almost died in the hands of a Saudi Royal family

Climate change is happening faster than we think

Ramla Ali: From refugee who fled war-torn Somalia to undefeated…