Woman who slept in lecture rooms graduates with master’s degree 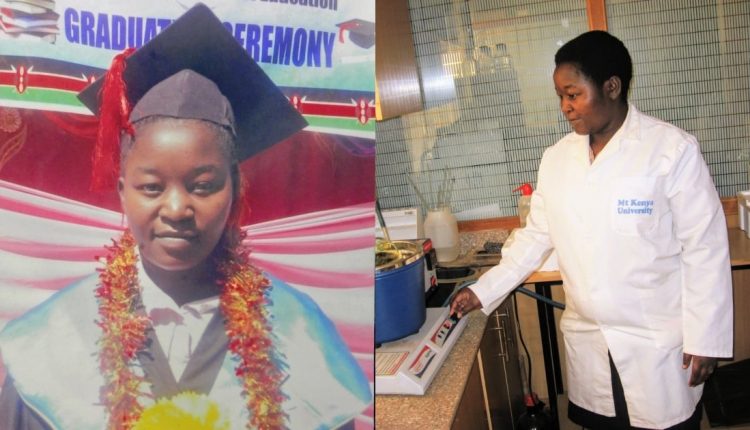 – Despite economic hardships, she joined MKU and received full scholarship

Born and orphaned at birth, Jespher Nyaboke grew under care of a cruel foster mother in the little known village of Kiong’ongi, Nyamira county.

So cruel was the foster mother that at the age of 10, Nyaboke was thoroughly beaten leading to partial loss of hearing in one of her ears.

Speaking to TUKO.co.ke, she said it was at that point that she decided to leave home and go anywhere that she thought would be hospitable for her.

“I was about 10 when I decided that anywhere, any place, would be better. I ran away from home, boarding a bus to Kisii town. A compassionate stranger spotted me and adopted me. He took me in with his family and began educating me,” she said.

After successful completion of her primary education, she joined Kebabe Girl’s High School and sat for her Kenya Certificate of Secondary Education (KCSE) exams in 2002 where she scored a C plain.

Armed with her certificate, the poor orphan knew her dream of becoming a nurse could come true.

However, as fate would have it, life took a different turn when her guardian died under mysterious circumstances.

“I dreamt of becoming a nurse. I admired how they wore spotlessly clean, white coats. Just when I was beginning to map out my dream, the guardian died. It was suspected poisoning. My hopes were dimmed in one stroke of misfortune,” she narrated.

Nyaboke resorted to doing menial jobs in the villages to make ends meet. While going through her daily work in 2009, she came across a friend who gave her a copy of Mount Kenya University prospectus.

“In it were diploma courses in nursing and medical laboratory. But the university was in Thika town, more than 300 kilometres from where I was. I didn’t have money for bus fare, let alone the tuition fees. I applied for a constituency bursary, and received KSh 4,000,” she said.

She came to #MKU with nothing but hope, and the clothes on her back.
She didn't have money for a hostel, so she slept in the lecture room and refreshed at the loos, daily. Her food was sweets.
Now, JESPHER NYABOKE has a Master of Science in Medical Laboratory. #TuesdayMotivation pic.twitter.com/zWLf8dX7O3

She used the money to buy school items and as fare from Kisii to Thika town with the hope of joining the university. However, upon arrival, she was told she would not be admitted as the institution required students to pay at least KSh 100 tuition fee to obtain an admission number. Not knowing what to do, she approached a gentleman at the admissions office who gave her KSh 100 which she immediately deposited at Equity Bank in Thika town. Armed with the admission number, Nyaboke felt her dream of becoming a nurse was getting close but yet too far.

“When I started my diploma course in Medical Laboratory at MKU Thika Campus in 2009, I used to sleep in class. I am not talking about the occasional dozing off during lectures. Literally using the lecture room as my bedroom. I had no money to pay for accommodation at the hostels, or rent out a room,” she narrated.

Every evening, she converted her desk into a makeshift bed, playing hide-and-seek with the school administration and night security guards.

In the morning, she would freshen up at the ablution block, take a sweet for breakfast and settle in class. She hid all that from her classmates and whenever they asked her where she stayed, she pointed at a nearby hostel.

“When the hunger became too much, I opened up to a close friend who took my plight to MKU Students Association Cabinet. The Cabinet wrote to the university Board of Directors Chairman Simon Gicharu who was very sympathetic,” said Nyaboke.

The university offered her full scholarship and in 2014, she graduated with a Degree in Medical Laboratory. The university employed her at the science laboratories. She has since done her Master’s Degree in the same course.

“There are no words that can sufficiently explain how I feel about this university. It believed in me when no one else could. It gave me a new life when the world had rejected me. Without exaggeration, this university is God’s gift to humanity,” she said.

My nightmare: Highway robbery at gunpoint