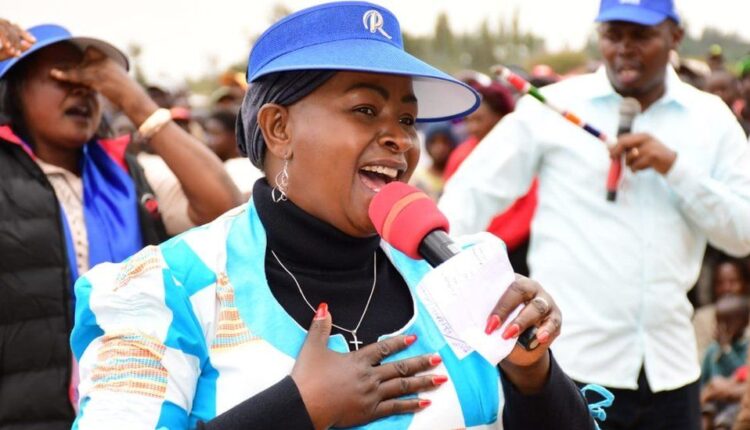 Wavinya Ndeti has defied bullying, attempts to discredit her academic achievements and xenophobic slurs over her marriage to emerge as a front-runner for the powerful post of governor of a key county in Kenya’s forthcoming general election.

The 54-year old mother of four told the BBC she has had to “toughen up” because male competitors and some voters “see women as the weaker sex”.

Ms Ndeti adds that her attempt to be governor for Machakos county, near the capital Nairobi, has been met with opponents’ supporters hurling insults at her, but she is undaunted.

“When they come at me I’m usually encouraged because it shows that I’m doing something right,” she says.

Now she is facing off with three men in governorship elections due to be held on 9 August, along with parliamentary and presidential polls.

Governors are in charge of huge budgets, and are expected to spearhead development in their counties.

This will be Ms Ndeti’s third attempt at the governorship. If elected she will become Machakos county’s first female governor.

Her political journey has not been easy as she has had her academic qualifications and family life questioned by her male competitors.

She holds a degree in computer science from the UK’s South Bank University and a masters in business systems analysis and design from City University, also in the UK.

Ms Ndeti’s qualifications have been questioned with some filing a complaint with the electoral commission, prompting her to release her graduation photos.

She was married to a Nigerian-British national – the late Dolamu Henry Oduwole, who she met while studying in London.

Critics have labelled her an outsider because of her marriage to a foreigner but she insists that she is a “daughter of Machakos”.

Machakos is one of Kenya’s 47 counties and its proximity to Nairobi makes its leadership attractive.

“One thing I can guarantee is that there will be gender balance in Machakos county if I’m elected governor,” Ms Ndeti told the BBC.

The county boasts a hilly terrain that is attractive to adventurous cyclists.

It is home mainly to people from the Kamba community, with most of their political leaders – including Ms Ndeti – in the coalition of veteran opposition leader and presidential candidate Raila Odinga.

Other female politicians who have been attacked for being married to so-called outsiders include Cecily Mbarire, who is running for governor in Embu county.

Ms Mbarire was born in Embu in the east and got married to a Kenyan from Teso in the west. She once sued a man who sent a text message threatening to kill her and called her a prostitute.

Suba North MP Millie Odhiambo has also been criticised for her marriage to a Zimbabwean man.

She has often called out men who attack female politicians saying they are weak.

Male politicians who have married foreigners are not targeted for their choice of spouses.

A Kamba community elder, John Mutua, says women are criticised because in most Kenyan cultures they are considered to have left their home of birth after marriage and are expected to “flourish in their new marital homes”.

Physical attacks on women have been documented, even in parliament.

During a heated debate in parliament over amendments to security-related laws in 2014, Ms Odhiambo accused her male colleagues of slapping her and removing her knickers.

She said one MP pulled up her dress and another tore and took off her panties during a scuffle.

One of the MPs accused has denied it. Ms Odhiambo said she wrote a letter of complaint to the parliamentary speaker but no action was taken.

In another instance, a male politician Evans Kidero while serving as the governor of Nairobi was accused of slapping the then county woman representative Racheal Shebesh after a confrontation about striking council workers.

A case was filed in court. Mr Kidero denied assaulting the MP. The case was later withdrawn and Ms Shebesh said she had forgiven the governor but later admitted to being paid millions of Kenyan shillings to settle the matter.

Despite these ugly incidents, Kenya has made some notable gains in women’s leadership.

The country got its first female chief justice, Martha Koome, in May 2021.

Three women – Anne Waiguru, Charity Ngilu and the late Joyce Laboso – were elected for the first time as county governors in 2017.

More than 10 women are running for the post in this election and six are front-runners in their respective counties.

And at a national level, three of the four presidential candidates have female running mates, in what analysts describe as a historic development.

Ms Karua told the BBC that gender discrimination has been a major challenge throughout her three-decade political career, and it remains a problem.

“The same old gender-based slurs that we faced 30 years ago are still with us but it is just a distraction,” she says.

Ms Karua adds that she deals with the slurs by ignoring them and “keeping [my] eyes on the ball”.

She says the number of women running for office has increased over the years but it is still not high enough considering that women constitute 50.5% of the population, according to the 2019 census.

The electoral commission has put the number of registered female voters at 49%.

Mr Ruto is the only presidential candidate who has not chosen a female running mate, but he has signed a charter pledging to ensure that women are appointed to 50% of government posts.

Analyst Nerima Wako says there has been a huge shift in Kenyan politics.

“More young women are now running for political office and considering to take up political leadership as opposed to the past when they were afraid because of bullying and harassment,” she told the BBC.